Springboard at the Aspen Ideas Festival 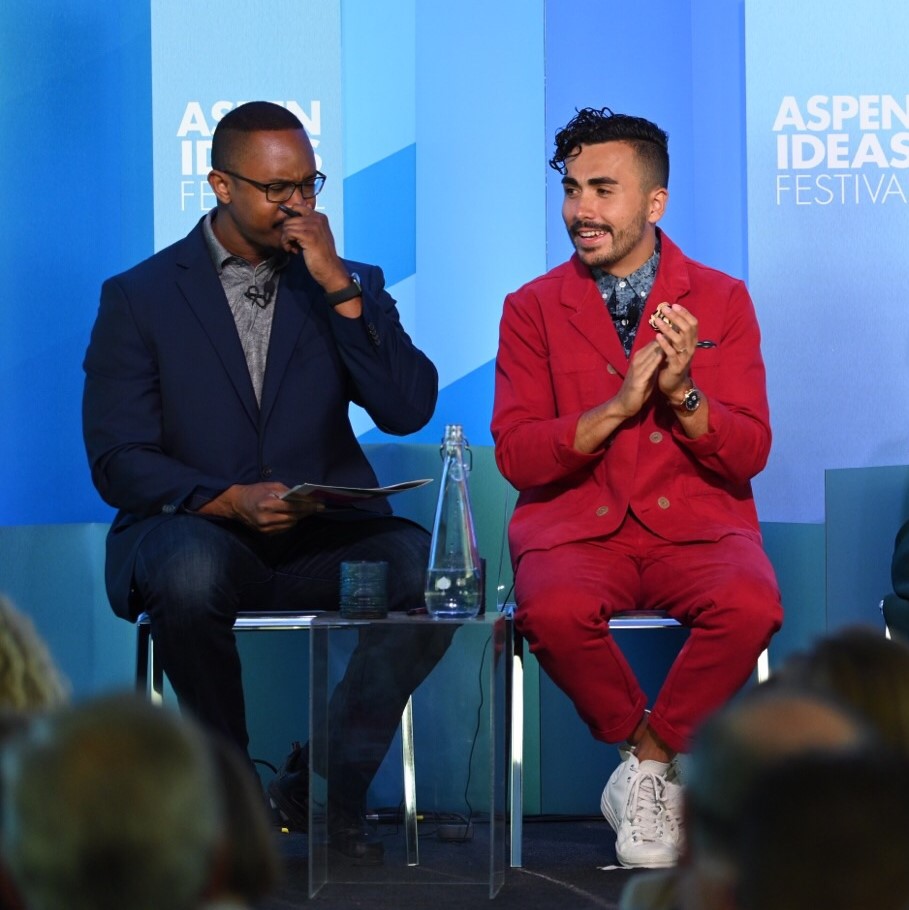 Last month, our CEO & Founder, Alejandro Gibes de Gac attended the Aspen Ideas Festival. David Brooks—New York Times journalist and cultural commentator—invited Alejandro to participate alongside him on a panel highlighting the Weavers’ movement. You can see a video of the discussion—titled “Repairing America’s Social Fabric, One Community at a Time”—by clicking here. Alejandro shares some of his reflections below.

I am incredibly grateful for David’s generous invitation to join him at Aspen Ideas Festival. The annual gathering attracts a level of power, wealth, and influence that social entrepreneurs—especially those of color, like myself—seldom have access to. Over the course of three days, I was able to seed relationships with thought leaders from sectors ranging from philanthropy to business to technology who can be transformative for Springboard’s trajectory and, ultimately, for the children we serve.

Aspen Ideas Festival is not without its ironies: private jets and poverty alleviation are difficult to reconcile. This setting, however, can serve as a springboard for our vision: to catalyze a culture shift by making family engagement the new normal in education.

David Brooks is also hoping to shift cultural norms; in fact, he believes that is the key to healing today’s social problems and pain. Read more about the Weavers’ movement—a social revolution fueled by compassion—in David’s powerful op-ed. David invited four social entrepreneurs to join him for a panel moderated by Joshua Johnson, the host of NPR’s 1A. Joshua asked us to share the inner work and insight that led us to put relationships at the center of our lives. How do we, in various ways, challenge today’s cultural norms that hold up social freedom, individual privacy, and monetary success as the pillars of a meaningful life? Here’s my take:

I think a precondition to weaving is that you first need to embrace a mindset of seeking out commonalities with others rather than fixating on differences.

In a culture that often values the individual over the collective, this is easier said than done. For me, it’s an ongoing journey, one that started well before I was born.

In 1973, my dad was taken as a political prisoner in his native Chile. His crime? Writing and directing Libertad! a play in protest of Pinochet’s dictatorship. It went over about as well as you’d expect.

After years of torture, he made it out alive. He was luckier than many. Even luckier, he met my mom while living in exile in Paris. My mother is from Puerto Rico, the youngest of 12, and the first in her family to go to college.

Though it meant giving up their own theater dreams, my parents immigrated to the US so that my sister and I could have better educational opportunities. It’s the kind of sacrifice that only a parent would make.

After a brief stint in Georgia, where my parents quickly realized that not every public school delivers on America’s promise, we hightailed to New Jersey with a new strategy: to rent the tiniest home in an affluent community with a great school system.

My sister and I were among the only poor and brown students in town. As you can imagine, middle schoolers liked to make us very aware of it. We were completely and deliberately unwoven from the social fabric. Almost by necessity, I developed a “me against the world” mentality, a simultaneous superiority and inferiority complex many immigrants grapple with. Individual triumph in the face of adversity became the fuel my engine ran on.

This led to achievement and isolation in equal measure.

After graduating from Harvard, I joined Teach For America and became a first-grade teacher in a Puerto Rican neighborhood in North Philly. In my students, I saw myself; and in their parents, I saw my own. The connection was deeper than just our shared language and complexion. It was the timeless truth you see in the eyes of any parent.

My students’ parents gazed at their children with the same unconditional love, unbridled optimism, and unwavering commitment with which my parents had gazed at me.

And yet my school—and, more broadly, our system—approached low-income parents as liabilities rather than assets. Picture a child’s time as an orange. Their classroom experience—just 25% of their waking hours—is a small wedge from which the education sector is fixated on squeezing more and more juice. Why does our system exclude parents, rather than engage them to juice the rest of the orange? Why don’t we see in a low-income parent the very same love, commitment, and potential that we so easily recognize in the parents at Aspen Ideas Festival?

This was my opportunity to start weaving!

I founded Springboard Collaborative to close the literacy gap by bridging the gap between home and school. We weave together teachers and low-income parents to help their children read on grade-level by 4th grade. In a nation where you can draw a straight line from 4th grade reading scores to incarceration rates, this changes lives.

Weaving is something that an individual can take on as a professional pursuit and a life’s purpose.

It is not exclusive to those in the social sector, however. When it comes to building better communities, weaving, in its purest form, is a daily habit–a series of small actions that emphasize commonalities over differences. It’s being a good neighbor. It’s being a conscientious voter. It’s suspending the judgment reflex in favor of a desire to understand the perspective of another. Weaving is being a compassionate soul. When compassion becomes countercultural, you know that our culture has work to do.

On my return flight from Aspen, it felt like summer camp had ended. The elite returned to their positions of power, and I settled back into the daily grind of growing a startup. Nevertheless, though the Festival is long over—and Aspen is a distant memory—I urge all attendees to ensure the Ideas continue to proliferate. Our society is counting on it.

Vietnamese
Use this email template to inform your school leader about Springboard!

I hope all is well since we last spoke! I know our (insert summer or afterschool) programming is still being decided, but I wanted to share some info about an organization called Springboard Collaborative. Springboard provides summer and afterschool programming to help students in kindergarten through third grade read on grade level. What sets them apart from other supplemental literacy programs is their focus on family engagement.

All of their programs are backed by a methodology called the Family-Educator Learning Accelerator (FELA) which helps teachers and families build relationships and host workshops to support student learning (they even have an open-source toolkit available for download). Moreover, their programs are designed with as much (or as little) management support that teachers need to implement the program and connect with families. And they have the research to back it up!

Their recently completed external advised study shows that 80% of Springboard students made significant gains in literacy outcomes and 11% of students moved from reading below grade level to at or above grade level after Springboard programming.

Based on our current programming needs, I believe Springboard would be a solid option to consider for our teachers, families, and most importantly our students. I highly recommend (insert name of district or school) schedules a call with their partnership team.